Getting Un-Plugged to Win

There’s something spreading like crazy through the town of Shady Pines. It’s not like catching a cold or the flu, but it is kinda like an addiction. You can’t see it, but you can sure hear it. And, it’s having a real effect on our neighbors, no matter their age. 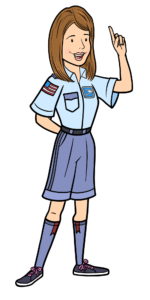 We’re talking about the strong attachment to cell phones. Nearly everyone has one. This need to be connected is a powerful thing. Once you own a cell phone, you can’t imagine being without it. It’s a lifeline to your friends and more. You talk on it, text, email, or, look stuff up on the internet. And, you constantly check your cell phone to make sure you haven’t missed any calls or messages. That’s why those ringing, pinging, beeping, odd sounding things are going off all the time.

Edna Sanders lost her phone a few days ago. She’s looked everywhere – the house, the car, and the last places she visited. She still can’t find the contraption. “Oh phooey, I guess I’ll just have to get a new one,” she thinks to herself. Edna decides she wants to talk to Harold. “He knows a whole lot more than I do about gadgets.” So, she leaves her house on Dogwood Drive and heads towards the Nuts ‘N Bolt hardware store where her husband works.

What a beautiful day for a walk. Main Street comes alive in early spring. The flowers burst with color in big pots outside the shops. Kids scoot around on skateboards. Some of the neighbors are out walking their dogs. For a moment Edna is sorry she didn’t bring her dog, Boomerang, with her. She left him home with Halley’s Comet, the cat. “Oh my, there’s no tellin’ what those two are getting into while I’m gone,” she says out loud to no one in particular. Oh well, “I’ll be home soon enough.”

Edna stops for a moment under a shade tree. Now that the clouds have parted it’s so bright out. She reaches into her purse for her sunglasses. While Edna is distracted, Shawn Billingsley approaches at a brisk walk. Everyone calls him Scoop, the cub

reporter, because he works at The Shady Pines Gazette newspaper. He’s looking down at his smart phone and texting away. The lanky teenager with the red hair has his ear buds in and the music on his phone turned up loud. Edna puts on her sunglasses and looks up, but it’s too late.

“Scoop!” shouts Edna Sanders. The words are barely out of her mouth when the young man slams into her, sending Edna reeling off the sidewalk.

A startled Scoop nearly falls over. “Oh, gosh, Mrs. Sanders, I’m so sorry.” He regains his balance and reaches out to help her steady herself. “Did I hurt ya?”

Scoop is very embarrassed. “I was trying to text one of my friends. Guess I wasn’t paying attention.”

He looks to his right and notices a nearby bench. “Would you like to sit down for a moment?” Edna reaches and picks up the sunglasses that fell from her face. “I don’t mind if I do.”

Scoop makes sure Edna is comfortably seated. “Thank you Scoop. You go on now. I’ll just stay here a minute.” Edna places her purse next to her.

“If you’re sure you’re all right,” he says. “I do need to check in with Zulah and see what assignments she has for me today.” Edna nods. “I’m fine. Go report something and tell my favorite editor, hello.” Scoop smiles and waves as he walks away.

As she watches him go, she thinks to herself, “That was a close call.” Then she laughs. Close call; Cell phone. Sometimes Edna cracks herself up. Her laughter doesn’t last long. What happening down the street?

Edna Sanders sits on a bench resting for a minute. Her trip downtown has been eventful. 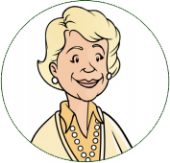 Just a few minutes ago, she had a brief collision with Scoop, the cub reporter who was distracted by his cell phone and walked right into Edna. Now, there’s another commotion. Down the street a bit Susan Landry is riding her bright, blue bicycle with the basket on the front. She has one hand on the handle and the other is holding her cell phone to her ear.

Before you know it, someone yells, “Look Out!” Susan brakes, but can’t stop in time. She smacks right into a tree and topples over. Several people run to help her. The first man to reach her helps her up. “Are you all right?” he asks. Susan unsnaps her chin strap, takes off her helmet, and shakes her blonde ponytail loose. “I think so,” she says. “My knee got kinda banged up.” The man’s son picks up the bike from the ground and leans it against the tree. “Your bike isn’t too bad,” he says. The dazed teenager looks at the slightly bent frame, “I think I’m lucky I was slowing down at the time,” says Susan.

Edna scurries over to help. “Susan, I saw what happened. Are you hurt?” Susan is still rubbing her knee. “Hi Mrs. Sanders. My wrist and my knee I think.” Edna looks concerned. “We’re just a few feet from Harold’s store. Let me help you. I know he has a first aid kit in the back.” With that, Edna puts her arm around the young girl to steady her. The man and his son follow them with Susan’s bike and helmet.

Once inside, Edna scans the store looking for her husband. There’s Harold serving up cold drinks at the soda fountain. An older gentleman who’s worked with Harold for years walks up to them. “What happened?” he asks. “Oh, good. George, we need your help,” says Edna. “Susan here fell off her bike. Will you please grab the first aid kit from the storage room?” George is on it. “Sure, Edna. Be right back.”

Edna guides Susan toward a seat at the soda fountain. “Let’s get you off that knee.” Harold looks up, sees her, and waves. “Hi ya, honey,” shouts Harold. “Susan, what’s wrong?”

Easing herself onto a seat at the counter, Susan winces a little. “I fell off my bike, Mr. Sanders.” All the rest of the seats are taken.

“Here, Edna, take my spot,” says Fred. The man with the kind eyes and the winning smile owns the Corner Grocer where people shop for food.

“That’s very sweet of you, Fred,” says Edna as she sits at the counter.

“Iced tea for both of you?” asks Harold.

Harold places the drinks in front of them. George hustles up. “Let’s take a good look at that knee, Susan.” The teenager rolls up her jeans. The knee is bruised and a little swollen. “I’ll get you all fixed up,” says George. You might want to call your folks, though. Here, you can use my phone.”

Susan and Edna look at one another. Harold asks, “What’s with the look?”

What is with the look? 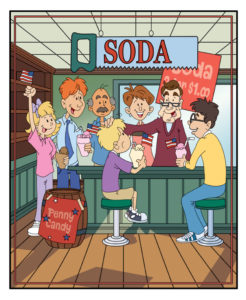 At the Soda Fountain in the Nuts ‘N Bolts Hardware store, Edna and Susan share a look. Susan Landry has just been in an accident due to being distracted by her cell phone. Edna Sanders came to her rescue. At this moment, George the store employee, is offering his phone to the teenager so she can call her folks.

Susan accepts the kind offer with a sigh. “Thank you, George.”

Susan shows everyone her smashed phone. “This is what caused me to crash.” Edna nods her head. “Not only that, Scoop walked right into me texting away. And some woman I didn’t know walked right into a parked car. She was looking down at her phone.”

Harold, Fred and all the folks at the counter are shocked. They had just been talking about this very thing.

“I don’t suppose you two have heard about the contest?” asks Harold.

While sipping her drink through a straw, Edna shakes her head no. Susan does the same.

Fred leans over to the counter and picks up a flyer. The title in big, bold letters says, Operation Unplug. “Look at this Edna,” says Fred. “It’s a contest offering a reward to turn off cell phones, the TV, tablets, and computers. You’re supposed to have face-to-face conversations instead.”

Harold puts a cherry on the top of a hot fudge sundae he just whipped up. “Order up!” he calls out as he slides it down the counter to a young gal sitting at the end. She stops it with her left hand. With her right hand, she whips out her phone and takes a picture of the beautiful dessert to share on social media. Harold continues, “Here’s the kicker, honey. The person or family with the best ideas on how to get folks to get un-plugged, wins a $500-dollar prize!”

“But there’s more,” says Fred. “Ole Beauregard Fibbs had to get into the act, so you also get a framed proclamation from the mayor himself.” 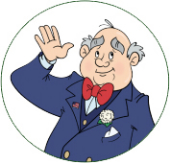 Edna laughs at that. “Well, this is too much. And to think I was coming over here to ask what I should do about replacing the phone I lost!”

Harold grins. ”Wanted my advice, did you dear?”

Edna must admit it. “Yes, I did, you ‘ole gadget guru. But I guess I should be asking how to get by with less time on any phone or computer, right?”

Harold breaks the mood with his laugh. “Edna, you did it. You just asked the $500-dollar question.”

Fred claps his hand together. “You know what? I can’t answer that question either. I’m never without my phone.”

Harold has a thought. “Fred, how long does the contest run?”

Fred looks at the flyer again. “It ends a week from today – next Friday.”

Harold is now pacing back and forth coming up with a plan. “Why don’t we do this? This time next week, we’ll meet back here, compare notes, and see if we can guess who’s going to win!”

Nearly in unison, everyone says “YES! That’s a great idea. What fun!”

Edna gets up, goes around the counter to her husband, and gives him a hug.

And with that, the group breaks up. Harold rings up their tickets on his old-fashioned cash register. One by one they file out. Each person is now on a mission. They all must come up with some creative ideas if they’re going to win the prize. What can they do to encourage others to be un-plugged? What will happen if they do separate from their phone or devices? How long can they go without a TV, tablet or computer?

Come back next time to find out who wins!

In the meantime, head over to Offline Resources for some good ideas on how to get your family members to Un Plug. Go HERE