All the windows are open in the Sanders house on Dogwood Drive. Big ‘ole fans in the ceiling whirr ‘round and ‘round, and a summer breeze sure would be welcome. It’s another hot, humid day in Shady Pines. 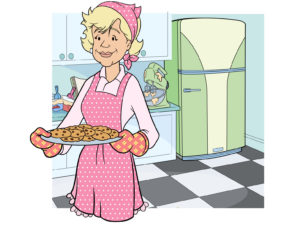 In the kitchen, Edna Sanders looks through her favorite recipes. “Oh, fiddlesticks. It’s hard to come up with ideas when it’s this hot,” Edna mutters under her breath. “I have no clue what to make for supper.”

Edna gets up to put more water in his bowl. “It really is the dog days of summer, isn’t it, Boomer? And that heavy fur coat of yours doesn’t help.” As she leans down to pat him, Edna thinks about her cat, Halley’s Comet.

“I wonder where she is,” says Edna. “By golly, I might just know. She makes her way down the hall to the bathroom near the front door. Edna quietly pushes the door open and sees the grey and white cat wrapped up in a ball sleeping in the sink. “She’s so smart. That’s probably the coolest place she could find.”

Just then, Edna has one of her ideas. “Ooooh, that just might work. I need to call Harold.”

Edna’s husband, Harold Sanders, is at work at his Nuts ‘N Bolts hardware store downtown. On Saturday the store closes at noon. Right now, Harold is walking up and down the isles with a clipboard checking supplies. “I can always tell when there’s a heat spell,” he thinks to himself. “We sure sell a lot of fans, garden hoses, wall thermometers, and those sorts of things.”

As he makes notes on what to re-order, his cell phone rings. “Hi Honey, what’s up?”

Edna is happy she reached him. “Harold, I have an idea.”

Harold chuckles. “Yes, but the repairs to the stove and the new fire alarm units were a bit – unexpected.”

Edna shrugs. “Yes, well, this is not that. What do you say we get the kiddie pool from the garage and let Boomer and Halley play in the water to cool off?”

That’s something Harold hadn’t considered. “Huh. OK. Except, do you really think Halley will go for this? I mean, she is a cat after all.”

Harold shakes his head. “All right. We’ll give it a shot. I’ll be home soon.”

Edna is excited. “Great. I’ll get everything ready. It’ll be fun. You’ll see!”

Harold stares at the phone. “Uh-huh. Love you.”

Edna smiles and says, “Love you, too.”

Oh, boy. There are things to do. Edna makes a list. First, she’ll make some lemonade and iced tea. Besides water, one can never have too many cold drinks available on a day like this.

Cold. That’s it. “Next, I’ll make a pasta salad with vegetables and some of that leftover roast chicken from last night. I can put in the refrigerator until we need it. “Boomer, buddy, I just figured out dinner. Plus, you and Halley can have some of the chicken, too!”

Boomer wags his tail and barks. Sounds good to him.

As soon as the drinks and the big bowl of pasta salad are finished, Edna moves on to the next step.

She hesitates for a moment. “Maybe I should put on my swim suit. No, these shorts and tee-shirt should be all right for now.”

As she heads for the door leading from the kitchen to the back yard, Edna makes sure that the doggie door is open. Halley! Boomer and I are going outside! C’mon Boom.”

Halley is already on her way. The noise and smells from the kitchen had gotten her attention. “Oh, for goodness sakes, you overgrown fur ball, I can hear you.”

The Sanders backyard is fenced with big, beautiful shade trees and lots of grass. Edna is especially proud of her flower garden with its different kinds of roses. But right now, Edna is looking for the hose. She wants to make sure it is hooked up and ready to go.

“We’ll need this to fill up the kiddie pool once Harold hauls it out here for us.”

Boomer scouts the backyard, trying to find the bone he buried. Halley watches a squirrel that is eating nuts up on one of the lower branches of the tree near the house.

“Halley, do you remember where I put that bone?” asks Boomer.

“Pipe down will you, Boomer?” hisses Halley. “Can’t you see I’ve got a bead on this critter?”

Boomer comes flying. “What critter?” When the squirrel sees the dog running, it races away.

Halley gives him one of her looks. “Really? You didn’t see the squirrel?” Boomer grins at her. “Nope.”

Meanwhile, Edna untangles the hose. “Oh, good it already has a nozzle on it.”

Bored with Halley, Boomerang wants to see what Edna is doing. “I’m going over there.” Halley will not be left behind. “Me, too.”

Edna sets the nozzle down and goes to turn on the water. “OK kids. Let’s make sure it’s working, shall we?” Edna turns the water on full force just as Boomer arrives and sniffs the nozzle. Halley is close behind. In a matter of seconds, water is coursing through the hose with a lot of power.

There’s just one problem. Edna didn’t realize the nozzle was locked in the open position. Before you could yell, “there she blows,” the nozzle takes off like a rocket, snakes around in the air in a crazy, whirly, swirly, whirlwind and sprays water in every direction.

Edna tries to grab it but misses. The only thing she can do is scurry back and turn off the water. All she remembers hearing is loud barking and a cat screaming.

That’s when Harold arrives. He bursts through the back door and surveys the scene. His wife is drenched from head to toe, his dog is sopping wet and hiding in the bushes, and his cat is up in the tree trying desperately to lick herself dry.

Edna pushes wet hair out of her eyes. Her tee-shirt and shorts drip with water, and her flip flops splish and splosh as she walks towards him. “I don’t think we’ll need the kiddie pool just yet.”

“I think you’re right!” He walks over to Boomerang and puts out his hand. “Boomer. Boy. Come here. You’re OK.”

Two, big, brown eyes blink and look out from the brush. Slowly Boomerang comes out of hiding and puts his head into Harold’s hands.

Halley looks down from her perch. “You’re a mess, Boomer. But you’re not hurt, are you?”

Boomer looks up and sees her way up there. “I’m OK. But this shows you are the ultimate scaredy cat.”

Edna joins in. “Oh Boomer, I’m so sorry I scared you. You, too, Halley,” she calls out. “Harold, we’re gonna need a bunch of towels, and a whole lot of tuna if we expect to get Halley out of that darn tree!”

It’s late afternoon now and the shadows in the backyard grow longer. A nice breeze causes the windchime made of spoons to sing. The wooden table with a blue and yellow tablecloth is set. Here we find Harold and Edna enjoying their pasta salad, crusty bread, and sipping on ice tea.

Two bowls are set out on placemats on the ground. One bowl says, Boomer and the other says, Halley. Both are filled with pieces of chicken.

“Mine has more than yours,” says Boomer.

“Does not,” says Halley.

Harold is relaxed for the first time. Edna has changed into a short-sleeved summer dress. Harold figures it’s safe to ask. “So, exactly what did happen with the hose?”

“Well, it all started when,” Edna begins. Boomer is lying in the shade, chewing on a new bone, and Halley snoozes in the seat of a lawn chair on a lovely evening in the small Southern town of Shady Pines.

Click here to buy the first Boomer and Halley book. 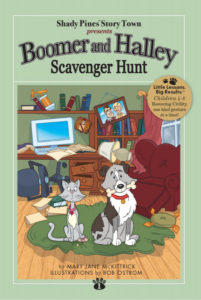