Will Shady Pines Elementary open on Time? The Game of Telephone

A brightly colored house sits right in the middle of Copy Cat Street near downtown Shady Pines. It won’t be much longer before the  school bus rumbles down the street on weekday mornings. Shady Pines Elementary is set to open in a little over a week.

But on this afternoon, the mom who lives here, is quietly doing laundry. In the little room next to the kitchen, Barbara Coleman folds towels and hums to the music coming from the radio. She looks at her watch. It’s 3 o’clock. Any minute now, her six-year-old daughter, Darla, will be home. The little girl takes dance lessons from a lady who lives a couple of houses away.

Barbara jumps as the backdoor slams shut. “Darla?” As Barbara turns, her daughter runs into her arms. “Mommy, I don’t get to go to school.”

Barbara is confused. “Sweetie, come sit down. Where did you hear that? During your lesson?”

Darla plops down on a chair at the kitchen table.

“Sally said the bricks are gone. There’s no school.”

Barbara sits next to her and strokes her hair. “Honey, Mrs. Moulton’s daughter might not be right about that.”

Darla nods her head up and down. “It’s true. I don’t get to go to school.”

Meanwhile, across town at Stonewall Park, a couple of moms and their kids have just finished their picnic lunch. While the two boys run and play, the moms sit on large, square mats with light and dark blue stripes that stand out from the green grass. They have cold drinks and a wonderful view of the lake. Both Mary and Beth discuss all the things they need to do to get their children ready for the first day of school.

Before they can compare notes, the boys come running up to them. “Mom, there’s no school.” 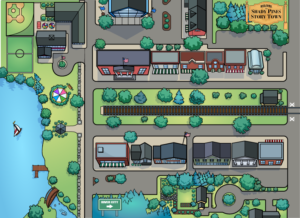 “Mom, we have to go to school in River City!”

The two women look at their boys and together react the same. “Whaaat?”

Beth looks at her son, Jimmy. “Whoa, slow down. Where did you hear that?”

Mary motions to her son, David, to sit down next to her. “Who’s saying such things?”

Jimmy goes first. “We were on the swings.”

“And we heard these two girls talking,” says David.

Jimmy says, “Yeah, they said the school’s not going to open – maybe ever.”

Beth says to Mary. “I know they’ve been making repairs to the school this summer.”

Mary replies. “Yes, but why wouldn’t it be ready on time?”

Jimmy jumps in. “Because a whole bunch of stuff has been stolen.”

Beth asks, “What kind of stuff?”

Mary is surprised. “A truck is missing?”

Beth has heard enough. “OK, everyone. Get your things. Mary, I think you and I had better call the mayor about this.”

The mayor’s office is in Town Hall. What started as a normal kind of day for Mayor Beauregard P. Fibbs has turned into anything but routine. The lobby is filled with people who want to talk to the mayor personally and the phones have been ringing non-stop. His assistant, Martha, is just plain flustered.

“Hello, Mayor Fibbs’ office, may I help you? You’ve heard Shady Pines Elementary is not going to open? No, we have no information about that. Of course, we’ll check into it. Thank you for calling.” 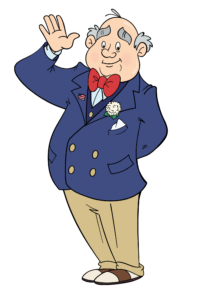 Sitting behind his big desk, Mayor Fibbs is taking calls, too. “Yes Mrs. Henry. We’ve heard all about the school not opening. What’s that? The mayor of River City says our kids will be bused to his school? Oh, you can be sure I’ll get right on this. Thank you for calling Mrs. Henry.”

Now the mayor is hot under the collar. What is the mayor of River City thinking? “MARTHA!”

With notepad in hand, Martha appears in the doorway. “Yes?”

Mayor Fibbs is pacing back and forth. “These calls about the elementary school are out of control.”

Martha walks in and sits down even though she can still hear her phone ringing in the other room. “I know what you mean. I need a break for a minute. So many parents and grandparents are upset.”

Fibbs agrees. “And now I’m being told that folks think the kids are being bussed out of town. Balderdash! I’m not about to let that happen.”

Martha hadn’t heard that one. “Oh, my gosh! What do you want to do?”

The mayor stops and leans up against his desk. “First, get the school superintendent on the phone will you, Martha? Let me see what she has to say before I take on the mayor of River City.”

After seeing dozens of people in his office come and go all day with the same concerns and outrageous stories, Mayor Fibbs is running low on patience.

Martha hustles in after the last group of parents leave. “Superintendent Davis says she’s been getting calls, too, and doesn’t know how all this started. She says that each story she hears is more outrageous than the last.”

Martha hands the mayor a stack of papers. 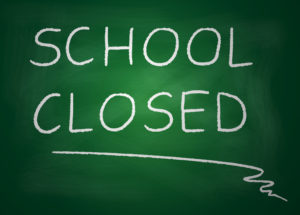 Martha says, “I typed up all the stories that we’ve heard about the school.”

“Oh, for Pete sakes,” says the mayor as he rocks back and forth in his chair.

The phone on his desk rings. Fibbs is slow to answer it. “Here we go again.”

Martha takes that as her cue to go back to her desk.

“Hello, this is Mayor Fibbs. How may I help you? Oh, man, am I glad you called. Where are you? Just outside? Well, get in here. We need to talk!”

Within minutes, a man wearing a shirt that says, Conrad Construction Company walks into his office followed by Martha.

Fibbs jumps up and shakes the man’s hand. “Jim, am I glad to see you. Martha, Jim Conrad’s company is doing the repairs on the school.”

Martha smiles, “I know. But with all the commotion, I did forget Mr. Conrad had an appointment to meet with you today.”

The mayor suggests Jim take a seat and asks Martha to stay and take notes.

Jim looks from one to the other. “Hey, what is this? You two look frazzled!”

Martha looks bewildered. “What did you say?”

The mayor looks serious. “Listen Jim, we’ve been getting a ton of calls and visits from folks who think school’s not going to open on time.”

Now Jim looks confused. “What are you talking about?”

The mayor points to the pile of paper. “Go ahead, Martha. Just read off some of the real doozies we’ve been getting.”

Martha starts to read: “The school will not open – maybe ever – because bricks, wiring, and even a dump truck have been stolen. Also, repairs to the basketball court and classrooms are way too expensive and will not be completed. For all these reasons and more, the kids will have to be bused to River City.”

Jim is shocked. “Nothing’s been stolen. We ran out of bricks and had to order more. They delivered the wrong kind of wire the first time. We’re waiting for the replacements. The dump truck isn’t lost. It blew a couple of tires. We had to special order them. We’re on budget and school will start on time.”

The mayor shakes his head. “Well, I’ll be. What we have here is that little ‘ole game of telephone.” 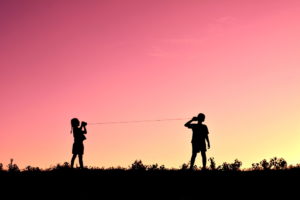 Jim answers. “It’s when one person tells a story. Someone overhears it and repeats it. Only this time the facts are a little off. And so on. Before you know it, the story isn’t anywhere close to what it was at the beginning.”

Now Martha gets it. “So, this was all just a bunch of rumors?”

Jim can’t believe this has happened. “What is it with people nowadays? Just because a lot of folks repeat a story and make stuff up, it doesn’t make it true.”

The mayor has an idea. “Martha and I will put out a bulletin and let everyone know the truth.” But first, how about I treat all of us to one of those new frozen coffee drinks down at Cup ‘O Joes?”

And with that they head down Main Street knowing that school won’t be tardy on its first day and that things are back to normal in the small Southern town of Shady Pines.

To find out how you and your friends can play your own Game of Telephone, go HERE