Get Out and Vote!

Scoop here. The countdown to the 2018 Mid-Term Elections is on and you can feel the excitement building. From Cup ‘O Joe’s  to Maggie’s Diner and darn near everywhere in between, our neighbors in Shady Pines Story Town are talking about how they’re going to vote. Some of those conversations get a bit loud that’s for sure. People are really passionate about their feelings. 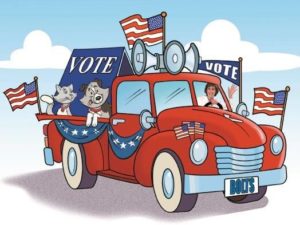 Lookey there. Our local author, Mary Jane McKittrick is driving around with Boomer and Halley trying to get out the vote. Or, maybe she’s out promoting that book of hers, Boomer and Halley Election Day, A Town Votes for Civic Responsibility. Either way, if she can get more people to the polls, that’s a good thing!

Here’s the breaking news I have for you. We’re seeing people participate in early voting in record numbers. Why, you’d think it was a presidential election or something. Folks seemed all riled up about the way things are in the country right now.

But, I have to say, down at the Shady Pines Gazette newspaper office, we’re kinda discouraged about 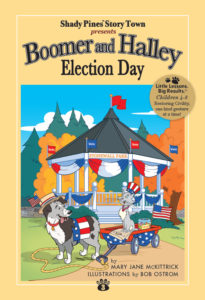 young voters not turning out. My editor, Zulah Talmadge and I were talking about that very fact this morning. She was checking the numbers coming in and it seems that only about a third of young people eligible to vote are actually voting. Ms. Talmadge was impressing upon me the importance of every vote. She told me when I get old enough, she’s going to make sure I get involved. The way she sees it, it’s the only way things change. She reminded me in a lot of places in the world, people don’t have the right to vote.

Well, until I can vote, I’m going to make sure I cover the story. This is my way of being a good citizen. Have you voted yet?

By the way, if you want the Election Day book, you can get it right now. You’ll see what it was like when we had a special mayoral election here in our small Southern town. Honesty and Responsibility were up for a vote and civility was the big winner. The whole thing was a hoot. ‘Ole Mayor Beauregard P. Fibbs was on the hot seat during that event. The entire town got involved. And the book won national awards and stuff. Get it HERE

Or, find you can buy the book on Amazon: