Hi Everyone. I’m Zulah Talmadge, editor of The Shady Pines Gazette newspaper. I’m also a reporter and I’ve come across a story I just have to share. It deals with kids showing real life gumption to help a neighbor in need.

Here in Shady Pines Story Town we’re always encouaging children to make a difference in our small Southern town. It can be as simple as helping around the house, raking the leaves off a neigbor’s front yard, or helping someone across the street. No act of kindness is ever too small to be appreciated. When you help others, you feel better about yourself.

That’s what five young friends in a city out west recently discovered. They heard that a woman in their community was missing. Do you know what they did? They jumped in to be of service to their community. Here’s how the local TV station, KCRA reported their story. 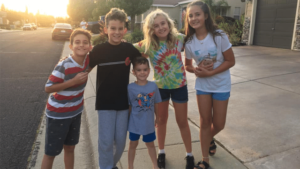 Roseville police posted a plea to Facebook Monday night while they searched for Glenneta Belford.

The search efforts for Belford focused on the Quail Glen and Blue Oaks neighborhoods.

When officers arrived, Roseville police said officers were overwhelmed by the number of people who came out of their homes to search for Belford.

“Kids can make a difference just as much as adults can,” said 10-year-old Makenna Rogers, who helped with the search.

A team of five Roseville children phoned in the tip that led to her.

“I just wanted to help,” said 10-year-old Logan Hultman. “I like helping, except if it’s with chores.”Logan and Makenna grabbed their bikes and their friends, determined to find the woman. But when Logan took a fall from his bike, the team took a break.

“My medic brother helped me,” Logan said. “He put some Band-Aids on my wounds.”

Logan’s brother is a 13-year-old Boy Scout who happened to have a first-aid kit in his room.

Even with the injury, the kids didn’t give up their search. After a quick dinner, they got back on the streets, spotting the woman not far from their homes.

“All of us saw this lady walking around and were were like, ‘Guys, that’s her. That has to be her,'” Logan said.

The team of junior detectives called police, telling dispatchers they found the woman.

“People started surrounding and the cops came,” Makenna said. “We were the first ones that found her.”

Belford was found safe and reunited with her family.

“Our dispatchers were a little surprised to hear a 10-year-old on the other line telling us they had found this missing person,” said Roseville police Officer Rob Baquera.

Now, the police department has a message for the friends.

“We highly encourage this group of junior detectives to give us a call in about 10 years,” Baquera said. “Maybe we can give them a job. They’re doing a great job, so far.”

An offer one of the friends thinks is pretty cool.

“It’s amazing,” Logan said. “I had no idea what my future would be until now: a detective.”

Wan’t that wonderful? This is just the kind of story we like to bring you. What do you think of these brave, young , detectives? Kindness and Caring is a way of life around here. Help us spread the word.