Oh, my heavens. I’m Zulah Talmadge, editor of The Shady Pines Gazette, and I’m in a bit of a tizzy. I had no idea how much folks these days want to be reassured that being nice hasn’t gone out of style. Here at the newspaper office we are getting all kinds of questions and interest regarding the new film featuring Mr. Rogers and his famous neighborhood.

When members of our community hear about a neighborhood where adults are kind and kids feel safe and appreciated, it makes them think of our town! In fact, some news outlet called Mayor Beauregard Fibbs the other day to do an interview about Shady Pines Story Town. The reporter is doing a comparison of our small Southern town to Mr. Rogers’ Neighborhood. I’ll have to get a copy of the article and share it with you. That’s just one reason why folks are in a dither.

The other thing that has caught everyone’s attention is that Tom Hanks plays the part of Mr. Rogers in It’s A Beautiful Day in the Neighborhood.  Reporters all over the place have been talking to the Oscar-winning actor who is known for being the nicest guy ever. We don’t see too many big time Hollywood stars around Shady Pines mind you, so I have to learn about Mr. Hanks from other people. 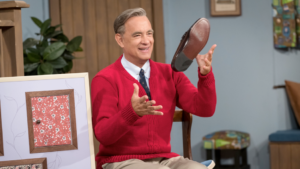 Here’s how I see it. Most of the time we find out that big time celebrities are not the terrific people we are made to believe they are. So, it’s just amazing to hear about all the random acts of kindness that Tom Hanks has been doing during his career. Just like Fred Rogers, Hanks is known to go out of his way to be nice. To learn about the many good deeds that are everyday events for this guy, you can read Taffy Brodesser-Akner’s article about Tom Hanks in the New York Times HERE.

I gotta tell you something. It just warms my heart to know that people are willing to celebrate the examples of basic decency we try to promote in Shady Pines. The animal and human characters who live here are known for their fun-loving stories. They really go out of their way to to show young children it’s cool to be good.  We believe kids need positive role models.

Gosh knows, no one is perfect. But you have to appreciate, judging by the calls I’m getting, we still admire people for their decency. That’s a really good thing. So often these days, it’s the people behaving badly who grab the headlines. At least for now, we’re reminded that once there was a warm-hearted man who was known for his delightful TV neighborhood and for the kindness he demonstrated in real life. Thank goodness, they found an actor to play the role of Fred Rogers who has the same approach to life.

By the way, while attending the premiere of his new film, Tom Hanks was told by a reporter interviewing him that he’s actually related to Fred Rogers! It’s an unbelievable moment. You can see that HERE

In the meantime check back for more update from Shady Pines Story Town where Kindness and Caring is a Way of Life!