Using The Spotlight To Do Good

Hi everyone, I’m Zulah Talmadge with The Shady Pines Gazette and I have a news flash. This story will touch your heart. Did you hear about the college football player who won the 2019 Heisman Trophy? Well, Joe Burrow not only won the biggest award, but it’s what he said during his acceptance speech that will really get to you. 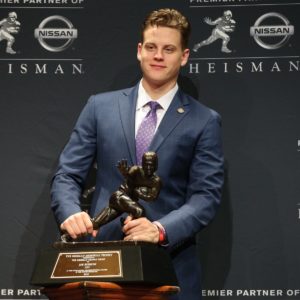 He took his moment in the spotlight to lift up others less fortunate and it nearly brought me to tears. That’s the sort of thing we celebrate in Shady Pines Story Town. Not only that, but because of his speech, he’s inspired a movement highlighting the generosity of others.

This is THE SHADY PINES WAY

Here’s the story as reported by, Allison Slater Tate for TODAY

What he managed to say in just a few sentences, though, would make a “huge impact” on his hometown, Athens County Food Pantry board president Karin Bright told TODAY Parents.

“Coming from Southeast Ohio — it’s a very, very impoverished area, and the poverty rate is almost two times the national average, and there’s so many people there that don’t have a lot,” Burrow said, apparently without planning to, according to interviews with his father afterward.

“I’m up here for all those kids in Athens and Athens County that go home to not a lot of food on the table, hungry after school. You guys can be up here too.”

The donations starting pouring in and five days later, the Athens County Food Pantry has accepted over $450,000 in donations, Bright said.

“You don’t usually associate hunger and food insecurity with football,” Bright acknowledged. Like many in Burrow’s hometown, Bright was watching when he won the Heisman, but she said no one expected what happened next.

“After I came home from church the next morning, I had a message that someone had started a fundraiser,” she said. “It started to take off in such a huge way throughout the day, and then all these generous people from all over the country and then the world started calling and making donations.”

Well represented among the donors were residents of Burrow’s new home state, whom Burrows thanked in his speech. “All these LSU fans believe the sun rises and sets with Joe now,” said Bright. “They were all talking about what he said at the ceremony. ‘Thank you for loaning him to us,’ they told me. ‘He’s a good one.’

The poverty rates in Athens County are even higher than Burrow cited, Bright said. Over 30% of the county’s residents live in poverty, and 20% are food insecure — the highest rate in the state of Ohio. The problem, Bright said, is the lack of industry and jobs in Athens, where the biggest employer is Ohio University.

“This is a big problem here,” Bright said. “This is not just a few people. And it’s not that they aren’t working. They might have jobs, but they cannot get ahead. They are the definition of the ‘working poor.'” The Athens County Food Pantry serves residents in four locations and includes a focus on groups like veterans and those affected by mental illness.

Next up: The food pantry’s board is working out how best to use the donations. Bright said they have sought counsel from other organizations on how they can make a long-term impact on their area.

“We want to honor the generosity of all these people and help in as big a way we can,” she said. “We are going to take the time to gather solid advice and make wise decisions.

“I know I speak for all of us at the food pantry when I say we would be thrilled to be out of a job because hunger is no longer an issue,” she said. “We need to do better.”

Click here for more information on how to donate to the Athens County Food Pantry.