Proud To Be a Girl Dad 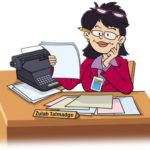 Until this week, I’d never heard the term, “Girl Dad,” but now it’s popping up everywhere on social media and beyond! Hi everyone, I’m Zulah Talmadge with news for you from The Shady Pines Gazette office.

The death this week of basketball superstar Kobe Bryant, his daughter Gianna (known as Gigi), and seven other wonderful people, has been a big topic of convesation. Bryant was only 41 at the time and his daughter was just 13 years old. The helicopter in which they were flying fell to the ground in the hills of Calabasas, California.

The shock of this deadly event could be felt all across the country. How did this happen? Was it the dense fog at the time? Was that the reason? It may take investigators a long time to answer that question.

In the meantime, memorials have been springing up in public places, including outside the Staples Center where the Los Angeles Lakers play. Kobe was king of that court for the twenty years he wore the purple and gold Lakers’ uniform. People of all ages and backgrounds have expressed their grief and shared memories of a man who was an icon and sports legend.

In a city filled with celebrities, Kobe Bryant managed to stand out.

He was not a perfect man. But he was a Lakers hero and was working on giving back to others in his second act.

Since his retirement from basketball, Kobe has put his family first. He and his wife, Vanessa, have four daughters. His devotion to his wife and to his girls was obvious to everyone who talked to him.

He was a very proud, Girl Dad.

Even when interviewers would ask him if he wished he had a son to carry on his basketball legacy, he would just smile and say, “No. She’s got this.” He was referring to his second daughter who he said was even better than he was at the same age. Gigi wanted to a professional women’s basketball player when she grew up.

That’s why it was even more painful to learn that the daughter who loved playing basketball and being coached by her famous father, died alongside him on their way to a game.

One of the tributes, along with all the others that have poured in since this unfortunate event, has started a viral sensation. The hashtag,#GirlDad, is trending on social media like crazy. Inspired by Kobe’s example, famous and not-so-famous dads are posting pictures and messages in support of their daughters.

It all started when a reporter with ESPN Sports Center, Elle Duncan, posted an emotional video. In it, she shared her encounter with Kobe Bryant when she was eight months pregnant with her daughter. Her video can be seen in this report from Yahoo Entertainment, along with some of the responses she’s been getting. You’ve gotta see this.     GO HERE

If you’re a proud Girl Dad, or if you known one, please leave us a comment to inspire others. This spreading of kindness is The Shady Pines Way!