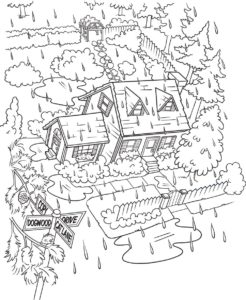 The Coronavirus outbreak is changing the way folks in Shady Pines Story Town spend their days. Harold and Edna Sanders are no different. In order to practice social distancing, they’re spending another day at home with their “kids.” Only today, Boomerang, an Australian Shepherd dog, and Halley’s Comet, a silver streak of a cat, are more restless than usual.

like crazy for much of the night and now into the morning. The heavy, gray clouds block the sun and make it dark inside the Sanders house. The rain pours down on the two story home on Dogwood Drive across from Copycat Lane.

“Oh, fiddlesticks,” says Edna, as she makes her way to the kitchen. “I’ll just have to turn on some lights around here.”

Harold Sanders wanders around the den looking for something. He shouts to his wife in the other room. “Honey, have you seen my reading glasses?” asks Harold.

Edna shouts back. “They’re not in here!”

Harold walks into the kitchen. “I don’t remember where I put them.”

Edna turns to look at him and smiles. “Dear, they’re on top of your head.”

“Oh, for heaven’s sakes,” he chuckles as he reaches up and touches them. “There they are.”

Just as he grabs the glasses from his head, Boomer and Halley race by and nearly knock him down. “What the… Boomer, Halley, what’s gotten in to you two?”

Edna gasps. “Harold are you all right?”

Harold holds onto a nearby chair and steadies himself. “Yea, I’m fine.”

“We’re going to have to find something for them to do or they’ll drive us crazy,” says Edna. 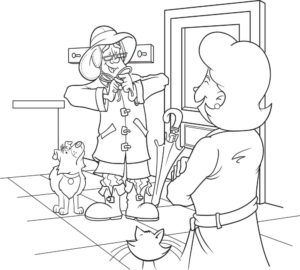 Harold thinks for a moment. “What about a scavenger hunt?”

“That’s a great idea,” says Edna. “Why don’t you take Boomer out and when you get back we’ll have breakfast.”

Harold shakes his head. “Oh, boy. You know how much Boom hates doing his business in the rain.”

Boomer wanders into the kitchen. Halley is heard scratching at her litter box in the pantry closet.

Edna smiles as she watches Harold get all suited up.

“All right buddy,” Harold says to Boomer as he attaches a leassh to the dog’s collar. “Let’s do this.”

After the breakfast dishes are cleared and washed, it’s time for Harold and Edna to set up the scavenger hunt. The first thing they do, is close the door to the kitchen so the kids can’t get out. 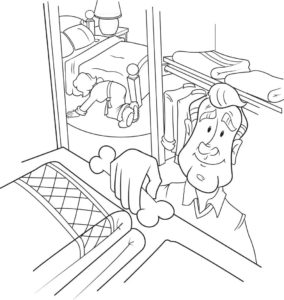 Now they can go around the house and hide treats and toys for the critters to find. Starting in their bedroom, they put some items up high in their closet and others under the bed.

“Be careful not to put anything where they might break something,” Edna cautions. 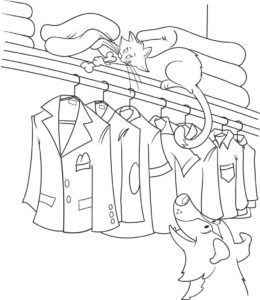 Do you want a preview of what happened when Boomer and Halley were set free to search?

Let’s just say things didn’t go exactly as planned! Oh sure, the kids knew the rules because Harold and Edna told them before they started. It took them a little while before they figured out how to work together to get the most loot.

And, as with every such adventure, there are life lessons to be learned along the way. In this case there are four: TEAMWORK, MANNERS, SPORTSMANSHIP and CLEANING UP.

Looking for something to read and to do?

Then order a copy of Boomer and Halley – Scavenger Hunt, Discover Rewards by Working with Others. It’s a Mom’s Choice Gold Award- winner. 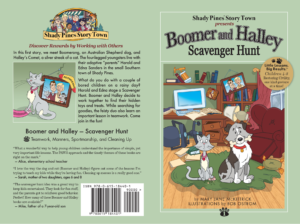 The book comes with black and white illustrations like the ones you see and doubles as a coloring book.

To buy a copy and start your own adventure without leaving the house, just go HERE