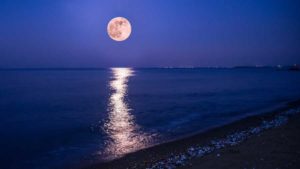 We’re gonna be in the pink this weekend. A full Strawberry Moon is happening Friday night. I’m Zulah Talmadge from The Shady Pines Gazette with some very exciting news.

Folks all around Shady Pines Story Town are getting excited. After all, when is a moon named for one of our favorite fruits?

After sunset Friday, this month’s full moon will rise above the horizon.

Known as the full Strawberry Moon, it’ll pass through the outer part of the Earth’s shadow. When this happens, a lunar eclipse will occur, so part of the moon will appear darker — but it’ll be so faint, you probably won’t notice it at all. In fact, if you live in North America, you may not even see the eclipse.

The Strawberry Moon will reach its peak of brightness on Friday at 3:12 p.m. EDT. But it won’t be visible until later that night.

When it does light up the night sky, the best direction to look is towards the southeast. Naturally, since our town in in the South, that’s perfect for us. This special moon should be with us through the weekend.

Unfortunately, if you’re hoping to spot a rosy moonrise, much like April’s Super Pink Moon, you’ll be out of luck. The Strawberry Moon’s name has nothing to do with its color — so it won’t be bright red.

Here’s how it got its name. It has to do with wild stawberries. It seems the Maine Farmer’s Almanac first published “Indian” names for the full Moons way back in the 1930’s. According to this Almanac, the full Moon in June is often the last full Moon of spring. The Algonquin Indian tribes called it the Strawberry Moon. The name comes from the relatively short season for harvesting strawberries in the north-eastern United States where the Algonquin Indians lived.

Later this month we’ll be celebrating the start of summer or the Summer Soltice. That usually happens either on June 20, 21, or 22. But, in the meantime let’s just look to the skies and enjoy our very own Strawberry Moon of 2020!
*** Please leave us a message below and let us know what you think!