The Woman Behind Father’s Day

Father’s Day is coming up later this month on Sunday, June 21st so my editor, Zulah Talmadge, gave me a fun assignment. She asked me to find out who came up with the idea of giving fathers their own special day.

I did some research and guess what I found out? It was started by an American woman. I’ve added some pictures of her.

They’re in black and white ’cause she lived a long time ago. Her name was Sonora Smart Dodd. She was born in Sebastian County in Arkansas in 1892

. Her mother, Ellen Victoria Cheek Smart, died when Sonora was only 16 years old. That’s just a few years older than me! 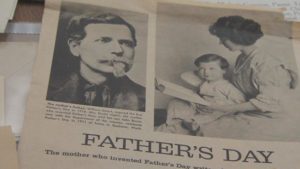 When Sonora Dodd married and had kids of her own, she realized what a tremendous job her father had done in raising her and her and her brothers.

One Sunday in 1909 Sonora was listening to a Mother’s Day sermon with her father at the Central Methodist Church where they lived. Sonora got really upset. The way she saaw it, her dad had worked so hard to to raise all his kids, so why wasn’t there a day to honor fathers? She decided to do something about that.

Dodd wanted the celebration to be held on June 5, her father’s birthday. Unfortunately, putting that plan into place ran into some difficulties. So the first Father’s Day celebration was pushed back to Sunday, June 19, 1910.  As Sonora Dodd’s idea gained more and more interest across the country, two National Father’s Day committees were formed, one in Virginia in 1921 and one in New York City in 1936.

President Woodrow Wilson got behind the idea of celebrating Father’s Day in 1913 and visited Spokane to join the celebration in 1916. President Calvin Coolidge chimed in with his support in 1924, as well.

In 1966 President Lyndon Johnson, seen here with his wife and two daughters, signed a presidential proclamation declaring the third Sunday of June as Father’s Day. President Richard Nixon established a permanent national observance of the day in 1972.

There you have it. A grateful daughter way back in 1909 came up with the idea for Father’s Day. And, we’re still celebrating dads to this day. We’ll have more on one of the most famous fathers in Shady Pines Story Town a little later.

But for now, in the space below, why don’t you tell us something about your father? Or, your grandfather. We’d like to hear from you.