It Started Where? The Story Behind Shady Pines 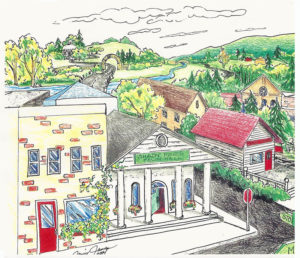 I’m going to take you behind the scenes of Shady Pines. You will have a backstage pass into the past to find out how this magical community became a reality. It’s a small Southern town with picturesque shops along Main Street. A railroad track runs right through downtown. The train station bustles with vistors arriving from other parts of the country.

The MacCaw River snakes its way out to horse country on the outskirts of town. We start our journey there.

Here we are. We’ve arrived at Brookstone Farm. It’s  located on land that was once the site of a steeplechase race track where horses and jockeys jumped over fences as they raced. 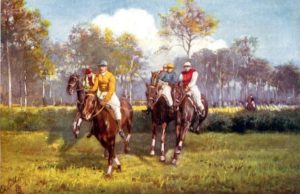 Imagine the setting. As we come through the gated entrance we find a family living out here. Back then there was a woman, two horses, three cats and even a foster dog that came to live with them at one point. It’s was a very lovely setting with dark brown wood fencing around the paddocks where the horses lived. They had their very own barn and even had a way to go in and out of the stalls to their individual pastures with green grass to eat. There was plenty of water in their water troughs when they got thirsty. 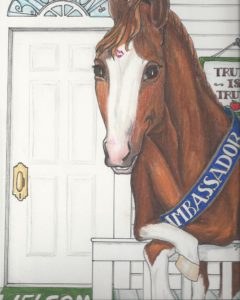 The male horse was a handsome guy named, Lexus. He was really tall, had a red coat, a white blaze on his face, and four white socks that went up to his knees. One man said of Lexus that he had “More chrome on him than a cowboy cadillac!” I guess that was a compliment. Of course Lexus thought it was, but then most things went right to his head. He thought of himself as the Ambassador of Brookstone Farm. His favority saying was, “Truth is Truth.” He often had lipstick marks on his forehead. It seems the elderly lady down the way would take walks in the evenings and chat with Lexus. Then, she’d kiss him. He was mighty proud that she took such a liking to him.

On the other hand, the female horse who lived with him was not as taken in by his charms. Black Tie was a jet black stunner, much smaller than her male companion. As far as she was concerned, all Lexus really wanted to do was “Graze and Gossip.” And that, she would often say, just got on her, “last nerve!” 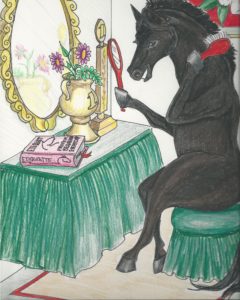 You have to understand that Tie was a bit more high strung than Lexus. After all, Black Tie was a champion dressage horse. That means she could perform moves that made her look like she was dancing. Lexus did dressage, too, but not like the sleek, black Mazerrati. She was not only highly skilled, but very precise. There’s something else I should tell you. Tie expected children to have manners. As a Southern Magnolia of a woman, Black Tie would carry her book of etiquette to correct any child who got out of line. You can only imagine how many times she had to pull the book out for Lexus! 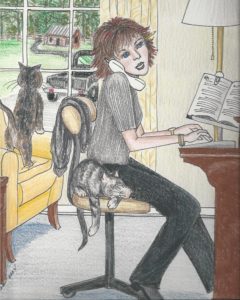 Inside the house lived their mom, Grace Underwood. She was a writer. Often at her feet you would find the two brown tabby cats. The elderly one was Geiger Counter. She named him that because as a kitten, Grace said the closer she came to him the louder he’d purr. The baby girl tabby was called, Chloe. She had bowed front legs but that never stopped her from running really fast and jumping up on her favorite gold chair. Geiger took things a little slower. He’d had asthma since he was a little tyke.

And, outside lived the fearless, female feline, Soleil. The white and grey tabby joined the family as a stray. Grace found her near the barn on the eve of summer. The sun was so bright that day. So Grace named her Soleil. It’s French for the sun. Soleil lived in the barn apartment. She roamed the neighborhood by day looking for adventure, and returned at night. 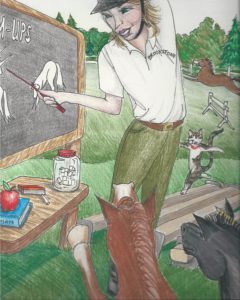 That is, unless there was reason for her to hang out and bother Lexus and Black Tie. She especially liked to pester Lexus. Picture this. The horses are having a lesson with their teacher. They are learning the newest moves to practice. While Black Tie takes notes and wants to make sure she understands the lesson completley, Lexus is another matter. Oh sure, he’s always asking questions, but Soleil knows he is easily distracted and she does all she can to throw him off his game. Often Lexus would get so frustrated, he’d just yell out, “Soleil, don’t you have a bird to chase or something?” 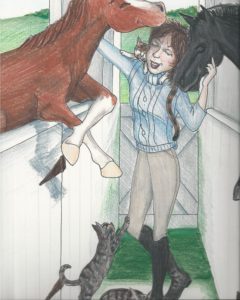 Yes they were quite a family. The interesting thing was, all of them were overcoming adversity. You see Grace was going through a divorce. She felt overwhelmed a lot of the time. Lexus and Black Tie were so talented as youngsters that their owners pushed them too far, too fast. They both had physical and emotional issues to overcome. Chloe had those legs, Geiger had his breathing challenge, and Soleil had been abandoned as a kitten and needed security.

But, together through love, laughter, family and the community of Shady Pines, they found healing. Brookstone Farm became a Portal of Healing. And Grace Underwood would go on to write more stories about a stray cat and dog adopted by a couple miles away in the small Southern town of Shady Pines. And, well, now you know the backstory. Here’s the rest of the story!

*PLEASE LEAVE A COMMENT AND LET US KNOW WHAT YOU THOUGHT*