Shady Pines After The Storm

The pictures tell the story. Hurricane Isaias walloped Shady Pines and then headed up north.

I’m Zulah Talmadge here at The Shady Pines Gazette news office. It has been a busy time for us covering this story ever since that storm hit us on Monday night and a heartbreaking time for many of our neighbors.

Winds topping 90 miles per hour whipped through here along with pounding rain. Tornado warnings went off constantly Monday night. It was really scary.

As a result of those high winds and water soaked ground, a lot of trees came tumbling down on cars and houses. There was rushing water on the streets

and those winds tossed some cars around like they were toys.

To the east of us in River City, boats that are normally all safe and securely tied to their docks, wound up on top of one another.

Tens of thousands of people across our state lost power. Crews are still working hard to get the lights back on for everyone.

Then, after all it did around here, that blasted Isaias took its mischief up the east coast. Don’t you know some of the same things happened to towns and cities up there? I’m telling you, even though the storm was downgraded to a Tropical Storm and not a Hurricane, it still did a whole lot of damage.

You can see that ‘ole Isaias ripped up a lot of folks’ homes. Even houses made of brick couldn’t stand up to those winds. You just know it’s going to take a good long time before these homes will be fit for people to live in again.

And it wasn’t just houses. A whole lot of businesses were damaged, too.

Just when so many of us are struggling to make ends meet because of the pandemic, the storm just came at such a bad time. Not that there’s ever a good time for a storm of destruction, but the timing of this one seems especially unfair.

One thing I can say at a time like this is that we all need to pull together to help one another. People are havig to clean up and clear out furniture, clothes, and all sorts of stuff that were soaked. Some things may have to be replaced.

This is when all of us need to rely on others to help us out when it’s too much to do by ourselves. There’s nothing wrong with that. It’s OK to ask for help when you need it.

Here is Shady Pines our neighbors have already been out and about dealing with trees that fell down. They got together to pull those trees upright and secure them with strong, thick, ties that they wrapped around stakes in the ground. That should give the trees time to grow strong roots in case of another strong storm.

Meanwhile, Harold Sanders who owns the Nuts ‘N Bolts hardware store downtown, is doing a different kind of raising. He’s talking to folks who gather at the soda fountain in his store about starting a fundraiser. He wants to raise money for some of our neighbors who did have damage to their homes.

That soda fountain is a really good place to spread the word and get something going. People of all ages go there not only for a cool drink or dessert, but also to hear Harold tell stories. Take it from me, he can tell some whoppers that’ll have you laughing in no time.

Harold is also a very kind man who loves this commuity. 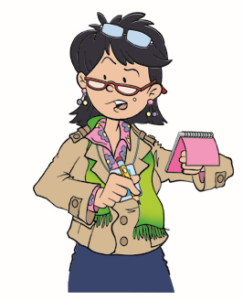 And, taking care of one another is important to all of us who live here in Shady Pines Story Town. You never know when you, or someone you know, may need help.

What are some things you can think of to do to help your neighbors who might have been hit hard by this storm? Tell us your ideas in the comment section below.

Until next time, Zulah out!