This has been a whirlwind of a news week, let me tell you. I’m Zula Talmadge with The Shady Pines Gazette. One of the biggest stories in the last few days was Senator Kamala Harris picked as Joe Biden’s running mate. This is the first time a woman of color has been selected to run for Vice President. That’s a big deal!

With former Vice President Biden trying to become our next president, Senator Harris will be the other half of the Democratic ticket. That means, together they will try to replace the current Republican President and Vice President, Donald Trump and Mike Pence.

When the news broke about this historic moment in American history, there was someone I wanted to talk to about it. She is our Shady Pines Community Director, Rita Mallena.

Rita has been really busy lately helping over at the elementary school. Everyone is till trying to decide if they’re going to open up school later this month. With the pandemic and all, Rita has been trying to see if some of the classes could be taught at the Community Center. Oh, good. There she is.

“Hi Rita, I finally tracked you down,” says Zulah 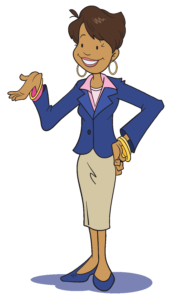 Rita is standing in the hallway loooking at the event board on the wall to see what activities are going on today.

“Yes, I know,” says Zulah. “May we go into your office? I’d like to get your thought about Senator Harris running to be our next Vice President.”

Rita starts moving in that direction. “Sure, that’ll be fine.” 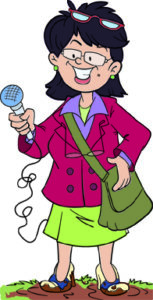 After they enter Rita’s office, Zulah closes the door so they won’t be interrupted.

“I guess the first thing I want to know, is how did you react when you heard the news?”

Rita takes a moment to gather her thoughts. “I was very happy and sorta surprised, I guess.”

“Well, I knew that former Vice President Biden said he was going to pick a woman as his running mate. But I was still a little shocked that he picked a woman of color.”

“Oh, absolutely Zulah,” says Rita. “Her career shows she takes serving the public very seriously and she is very sucessful. I just wasn’t sure Mr. Biden would want to deal with all of the negative things people would probably say about her.”

“That’s why I wanted to talk to you, Rita,” says Zulah. “Has that happened to you?”

Rita sits a little taller in her chair. “Oh, yes, Zulah. Over the years, people have said some very mean things to me. I have been passed over for jobs, I have been called names, and when I was little, some of the girls in school wouldn’t play with me because I didn’t look like them.”

Zulah is sad. “That must have been so hard.”

“It was,” says Rita. “I was lucky that my parents always encouraged me to follow my dreams no matter what. Moving here to Shady Pines and taking this job has been the best thing that’s ever happened to me.”

“Because in Shady Pines people treat you like you’re just the same as them. People here are kind and caring and bullying is not allowed. Do you know how much I wish every town could be like this?”

Zulah nods her head. “I do. As you know, I used to travel a lot before the pandemic covering news in other places. I am often surprised at the neagative and unkind way people treat one other. It’s exhausting to be around.”

“That’s a good way to put it,” says Rita. “Being kind and caring to your neighbors makes you feel good and you have more energy.”

“It sounds like both of us are going to be watching this presidential campaign very closely in the days ahead,” says Zulah.

“I know I will be,” says Rita. “My hope is that people give Senator Harris time to get to know her before they make any decision about her. We all need to listen to one another and try to understand why someone feels the way they do about things.”

“Thank you for your time, Rita,” says Zulah. “I hope you won’t mind if I check back in with you later on as the presidential campaign gets going.”

“Meanwhile, I’d better get back and write up this interview or it won’t make it in time for the next edition of the Gazette.”