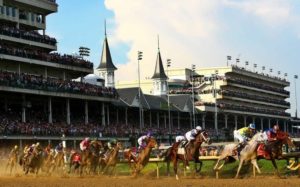 It’s Kentucky Derby week and Derby fever is alive in Shady Pines. Edna Sanders is very excited. She looks forward to this horse race every year. It’s known as the best two minutes in sports.

Of course, this year is different in so many ways. The Kentucky Derby is usually held on the first Saturday in May at Churchill Downs racetrack. That’s in Louisville, Kentucky. But this year it was pushed back to the first Saturday in September. The folks who put on the event hoped fans would be allowed in by then. Sadly, they won’t. But the race will go on.

Why is this sporting event special to Edna?

“Oh, for heaven’s sakes. How can you not like to watch those beautiful horses running in full flight? First, all twenty of them crowd each other as they go into the Clubhouse turn. Then, they go down the backstretch just a galloping along. It gets really exciting when they round the final turn and finally 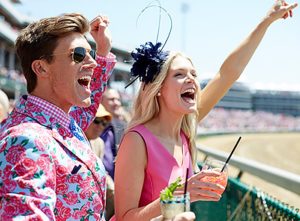 charge down the stretch in front of the grandstand.

People scream for their favorite horse. They clap and even jump up and down. Why, If their horse wins, they go plumb crazy. It’s so darn much fun even just watching it on TV. It gives you goose bumps!”

The winner has a bunch of roses flung across his neck and all his human connections get to pose for a picture and get a big trophy.

Last year, the Run For the Roses had something happen that never happened before. The horse that won the race was disqualified. The officials said he bumped some other horses and could have caused a pile up. Sometimes in racing as in life, things don’t go your way. You can watch it for yourself HERE.

Edna is quick to point out, you don’t have to love horses to like the Derby. For instance, the stuff people wear is something else altogether. You have to see it to believe it. First of all, the ladies like to dress up and 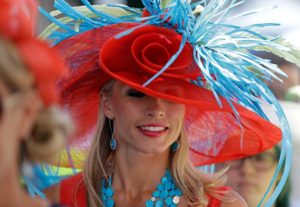 wear hats. But not just any hats. BIG ‘ole hats.

It seems even some of the horses are not exactly sure what those humans are doing with those things on their heads. 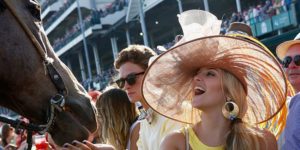 Let’s face it, when it comes to the Derby, bigger is better. But then again, there are those fans who like to get a little kooky with their hat selections.

And, it’s not just the women, the men get in on this hat business, too! Now, how much time do you suppose it took for this gentlemen to come up with a hat like that? It’s all part of Derby day fun.

Wonder what hat Edna plans to wear this year? 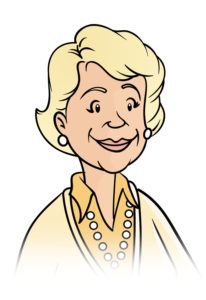 “Oh, my goodness. I haven’t had a moment to think about my Derby outfit. Normally, by this time I would know what I was going to wear and how many of my friends would be coming over.”

But this year, no one will be coming over because Covid 19 is still spreading and people are getting sick. It’s not safe to have all my friends crowd into the kitchen like usual or even around the TV to watch the race.

“I may have to change up my menu, too. Well, since Harold will be here we can start off like we usually do with some mint juleps.

It’s the traditional drink they serve at the Derby. I even have some of those special glasses to serve them in. You know, the ones with the little horseshoes on them?I make sure to serve them when they’re good and cold. I’ll 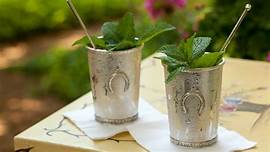 tell you what. Those drinks are very refreshing and just like a racehorse, they have a bit of a kick to them. Harold likes them, but if you have kids, you’d best stick with lemonade!”

Derby Day foods are always fun and festive. If you’d like to explore some traditional Southern foods fit for the day, here are some suggestions from Woodford Reserve Derby Dishes to Explore.

As for Edna, she has  some favorites that are her go-to. 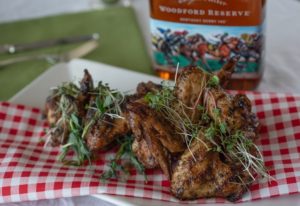 “Well, Harold and I love chicken wings. And I found a wonderful recipe from those Woodford folks last year. I took a picture so you could see how they look. They are so good. We’ll have some green vegetable of some sort, some fruit and a pecan pie to round things out. We’ll probably do something like that this year.”

With food, fashion, and traditions covered there’s only one thing left to do. You need to decide what horse you’re going to root for this Saturday, September 5th.

The top three horses with the shortest odds so far are:

We asked Edna if she has a favorite.

“I don’t know. I don’t know. Tiz The Law won the Belmont Stakes in NY last month. It’s supposed to be the last race in the Triple Crown series, but this crazy year the Belmont went before the Derby. Honor AP won the Santa Anita Derby out in California. And Art Collector won the Bluegrass States in KY. I’m so torn.

Then again a long shot might beat all three of them. You just never know!”

NBC Sports is home to the 146th Kentucky Derby, providing comprehensive race coverage and analysis live on NBC, NBCSports.com and the NBC Sports app before, during and after the main event. Coverage begins at 2:30 p.m. ET.

And that’s why You need to watch the Kentucky Derby. Two minutes of pure fun!