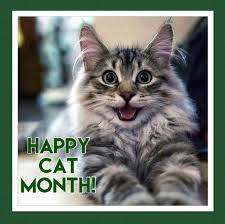 Here’s something I bet you didn’t know. I’m Edna Sanders and want to tell you that September is Happy Cat Month. That’s right. It was started a few years ago by the CATalyst Council.

There really is such a thing. Why, you can find them on the internet.

Anyway, I saw their flier on the bulletin board when I was in Shady Pines’ very own pet store, Pets Galore. I was picking up some items for our dog, Boomerang, and our cat, Halley’s Comet.

The idea for this event is to let cat owners know what they can do to make sure their favorite kitty is happy and healthy.

Well, most people who live around here already know that Halley has very specific ideas about what makes her happy. It starts with getting loads of attention.

Oh, wouldn’t you know it? Here she comes now. 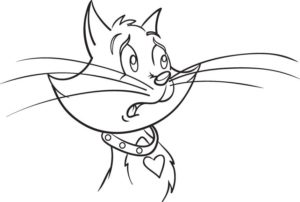 “Uh-oh,” says Halley. “Why is mom calling me? Do you think I’m in trouble Boomer?”

The Australian Shepherd wanders into the kitchen just behind the silver streak of a cat. Right away he’s surprised that his mom is calling for Halley and not for him. After all, everyone knows he’s mom’s favorite. It sure isn’t that silly cat with more attitude than sense. Maybe Halley is in trouble.

“I dunno. What dumb thing did you do this time?”

“Thanks a lot, you overgrown furball,” says Halley giving him a flick of her tail. “I brought her that lizard. But that was last week. I’m sure she’s forgiven me by now.”

“What’s with you cats?” asks Boomer. “You thought mom would think that slimy critter was a gift?”

Halley stares at him. “It was a gift. It was my way of telling mom I love her.”

Boomer shakes his head. “You are so weird.”

Meanwhile, Edna gets up from the kitchen table, pets Boomer and picks up Halley. “Look, girl,” says Edna. She puts Halley down next to a picture that shows a cat and the words, September is Happy Cat Month. 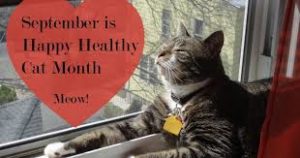 “Boomer do we know that cat? And, why is mom so excited about that picture?”

Boomerang is lying under the kitchen table chewing on his bone.

“Nope, Never seen that cat. And I have NO idea why ANYONE would be excited about a whole month dedicated to cats.”

Edna has more to say. “It says here that there are things I can be doing to help you be happier and healthier. Why, I thought I was doing quite a lot already!”

Halley walks around on the kitchen table as mom talks. She just has one question.

“Boomer, do you think this is the part when she gets out the can of tuna? 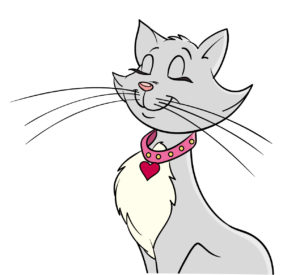 ‘Cause she knows that makes me happy.”

Boomer stops chewing and looks up at her. “I think I’m going to be sick.”

“Oh, hush. I’m sure there’s something that celebrates dogs,” says Halley. “But if I understand what mom’s saying, I get a whole month of being pampered. Wow!” 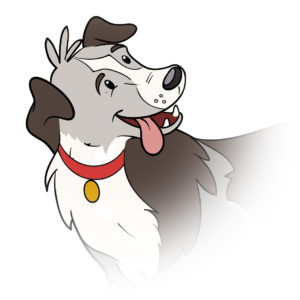 Boomer blinks a couple of times. Then, his jaw flops open. He’s realizing that he has to put up with Halley acting like a celebrity for a month. This just won’t do.

Boomer has an idea.

“Where are you going?” she asks.

“I’m going to the den. I’m getting on dad’s computer and finding out what month celebrates me!”

Halley shouts at him. “Good luck with that. I’ll just be here eating my tuna and being admired.”

Boomer barks at her from the hallway.

Edna looks up from her phone. “That’s strange. I wonder what’s up with Boomer?”

Halley bats her eyes and presses against Edna.

“Well Halley ‘ole girl, I’m going to check out this link from the Catalyst Council and find out what I’m supposed to do for you this month. How does that sound?” GO HERE FOR THE LINK