THE DEATH OF AN ICON

Flags fly at half staff in front of the U.S. Supreme Court building in Washington D.C.

Flowers and homemade signs pile up on the sidewalk. Our nation pays tribute to Justice Ruth Bader Ginsberg who died from cancer at age 87.

I’m Zulah Talmadge in the Shady Pines Gazette news office. Justice Ginsberg was a very small woman, but she was a towering figure in the fight for equal rights. I’ve always admired her passion for the law.

Let me tell you a little bit about her. Justice Ginsburg was born in Brooklyn, New York, on March 15, 1933. In those days, the laws treated women differently than men. Ginsburg would grow up to challenge the laws that barred women from jobs and even some colleges.

After getting good grades in public schools, she went to Cornell Universtity. That’s where she met her husband, Martin Ginsberg. She would tell people that,”What made Marty so attractive to me was that he cared that I had a 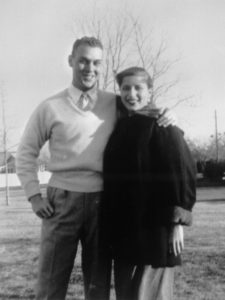 Eventually, Marty was admitted to Harvard Law School. Ruth Ginsburg got in the next year. There were only 9 women in her class of more than 500 students. A dean asked her why she was “taking the place of a man.”

That didn’t stop her from becoming the first woman on the prestigious Harvard Law Review. When her husband

underwent surgery and radiation treatments for cancer, she cared for him and their 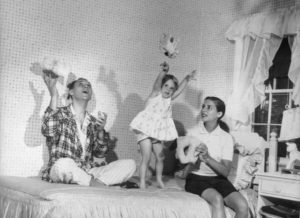 daughter. She did all of this while managing her studies and helping Marty with his homework. Ruth rarely slept.

After graduating from Harvard, Marty got a job in New York. Ruth transferred to Columbia Law School She graduated at the top of her class. But she had a hard time getting a job in a law firm.  This was back in 1959. Women, and especially mothers, were not wanted because they might not be available for working long hours and such.

Eventually, Ruth broke through a lot of those barriers. She became a working lawyer and even had a second child. When she started arguing cases in front of the Supreme Court Judges, people took notice.

Between 1973 and 1976, she argued six cases before the Supreme Court about men and women not getting fair treatment under the law. She won five of those cases. The first time she appeared before the court, she quoted the women’s rights activist Sarah Grimke: “I ask no favor for my sex. All I ask of our brethren is that they take their feet off our necks.” 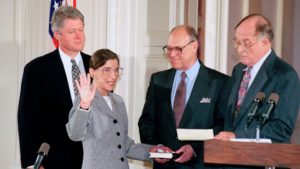 President Bill Clinton nominated Ruth Ginsberg to the high Court in 1993. Her nomination passed in the Senate and Ruth took her seat beside all those men.

Of the nine justices, the only other woman was Justice Sandra Day O’Conner. In her 27 years on the Supreme Court, Ginsburg championed equal rights. One of her most famous cases was the right of women to equal pay.

Justice Ginsberg argued that a woman named, Lilly Ledletter, should get back pay after she discovered that for years she wasn’t getting paid the same as her male co-workers.

It would take a little time, but when he bacame president, Barack Obama signed the Lilly Ledbetter Fair Pay Act.

That was due to Ruth’s determination. For all of her efforts for all people to be treated the same under the law, Justice Ginsberg became famous outside the legal world. In fact, she was celebrated as being really cool. 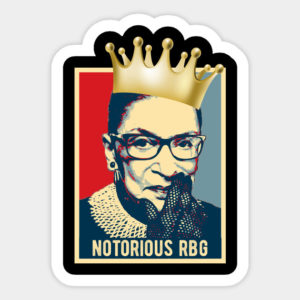 Admirers called her “The Notorious R.B.G.” after the rapper The Notorious B.I.G.  People started wearing clothing with her image on it, dressed as her for Halloween, and bought RBG dolls and coloring books.

In 2018, the hit documentary “RBG” told the story of her life. You can see a little of that documentary by CLICKING HERE.

As she got older, Ruth became a fitness influencer. Even  much younger people 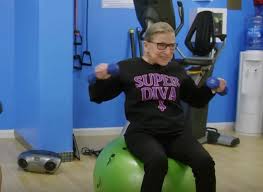 could not keep up with her strength-training

She was also known for her plain speaking. When asked how many women on the Supreme Court would be enough,  she answered “nine.”

Here in Shady Pines Story Town and all across our country, people are remembering a woman who never stopped fighting for equality for us all. 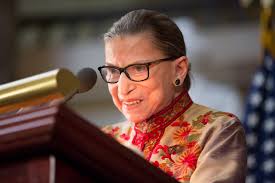 She was still working as an active member of the Supreme Court at the time of her death.

When asked how she wanted to be remembered, Ruth said, “Just as someone who did whatever she could, with whatever limited talent she had, to move society along in the direction I would like it to be for my children and grandchildren.”