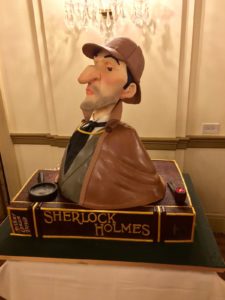 The calendar reads January 6th. You know what that means? It’s Sherlock Holmes’ birthday! He may be a crime fighting character out of books from a long time ago. But, through movies and television dramas people all over the world still follow this famous detective as he travels around London, England solving mysteries. In fact, Sherlock Holmes has a real fan living in Shady Pines Story Town.

When Edna Sanders looks out her kitchen window, all see sees is thick fog blanketing her home on Dogwood Drive across from Copy Cat Lane.

“It’s dense as pea soup outside. Looks like I could be living in England. They have nothing but fog over there,” she thinks to herself.

Edna sips her morning coffee and reads the latest edition of The Shady Pines Gazette newspaper. On the second page near the bottom there’s an image and it says, ‘Happy Birthday Sherlock.’

Edna stares at the page. “Oh, golly. Oh, boy. This is great!” She claps her hands for joy. Edna is really excited. She’d forgotten what day it is. 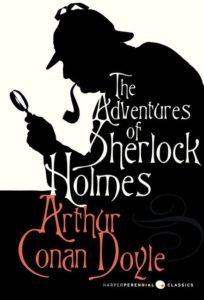 Her favorite detective of all time was born on Januray 6, 1861. Everyone knows how much Edna loves these stories. Why, one of her best friends just sent her a book for Christmas called, The Adventures of Sherlcok Holmes.

I’ve got to tell Boomer and Halley. Just then, an Australian Shepherd dog wanders in followed by a silver streak of a cat. “Good. There you are. I have big news to share,”says Edna.

Boomerang cocks his head to one side and wags his bobbed tail while Halley rubs against Edna’s leg.

Boomer is trying to figure that out. “I have no idea. Hope we get treats.”

Halley looks up. “Is that a book?”

Edna sits at the kitchen table stroking their heads. “Kids, today is Sherlock Holmes’ birthday.” Boomer and Halley just stare at one another. “Huh?”

WHO IS SHERLOCK HOLMES? 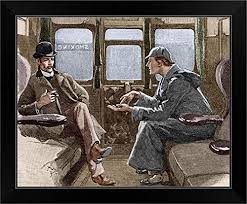 “Let me get your chew bone Boomer, and Halley I’ll get you some tuna. Then, I’ll tell you all about him and his famous partner, Dr. Watson. He was a retired army officer, don’t you know.” 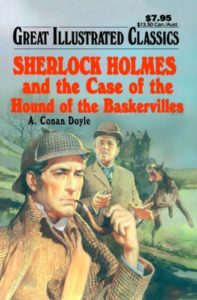 With both animals happily chewing and snacking, Edna contines. “You see kids, Sherlock Holmes is a character from books written by Sir Arthur Conan Doyle. His most famous story was The Hound of the Baskervilles.”

Edna pours herself another cup of coffee. Halley now snoozes on her window seat and Boomer and his bone are under the table. Edna is thinking of so many things. “Here’s the deal. Sherlock is a genius. He soves crimes no one else can figure out.  That’s what’s so fun! 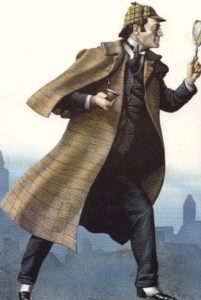 He’s also known for that tweed hat he wears, the pipe he smokes and the magnifying glass he uses to look for clues.” 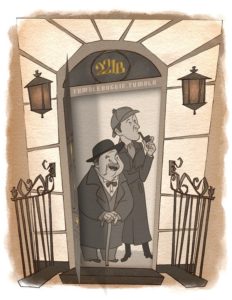 Edna continues. “Sherlock lives and works out of his home at 221b Baker Street.” All of a sudden Edna stops talking.

“That’s it! In honor of his birthday I’m going to create a mystery right here in our house. I’ll leave clues all over the place and then when Harold gets home, you guys can help him solve the case.”

Edna is very pleased with herself. “I’d better call Harold and let him know what I have in mind.” The phone rings by the cash register at the check out desk.

A MYSTERY AT THE SANDERS HOME

“Nuts ‘N Bolts hardware. This is Harold, how may I help you?”

Edna clears her throat. “Hi honey. Are you having a good day?”

Harold know Edna very well. He can tell something’s up. “I everything all right, dear? Are the kids okay?”

“Yes. Everything’s fine. It’s well… you might want to be prepared to solve a mystery when you get home,” says Edna. 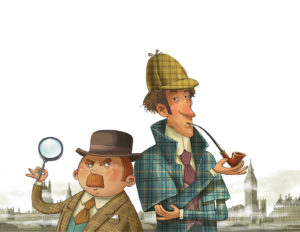 “No, nothing bad,” says Edna quickly. “You’ll just need to use all your skills to figure things out. You know, like a really smart detective. Boomer and Halley will help.”

Harold shakes his head. “What? Oh, that makes it so much better.”

“Bye, honey. See ya later,” says Edna as she ends the call. She looks from Boomer to Halley then back again. “Kids, as first rate detectives, we’ve got a crime to create and solve. We must think like Sherlock Holmes. So, let’s get to it my dear, Watson!”