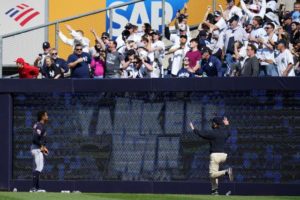 What is going on? Why do people act like this?  This is NOT the Shady Pines Way! I’m Zulah Talmadge, editor of The Shady Pines Gazette news. 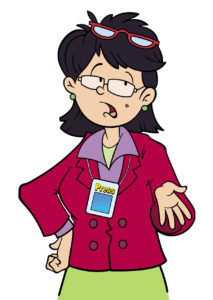 My Twitter feed is blowing up and we are getting all sorts of calls here in the newsroom.

Fans at a baseball game went crazy over the weekend in New York and we’re hearing about it!

Scoop the Cub Reporter is busy checking sports feeds at his desk.

Yankees were playing the Cleveland Guardians in Yankee Stadium. The New York fans were making fun of some of the Guardians players in the outfield after one of them missed catching a ball. Then, the fans started throwing bottles, beer cans and other trash at them.”

Zulah shakes her head. “Don’t people realize someone could get badly hurt? And also, aren’t these professional baseball players supposed to be role models for kids?” 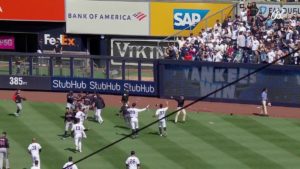 Scoop nods and cues up the scene to show Ms. Talmadge. “This is really bad.”

Zulah can’t believe it. “Watching it happen in real time is even worse. You can see the fans making fun of the players, calling them losers, and throwing trash at them.”

Scoop sighs. “Sports is about respectig your opponent. You’re supposed to win or lose with grace. That’s what my coaches always tell me.”

It’s Happening In College Too! 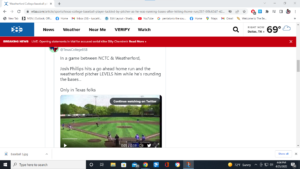 This was a disgrace. Our kids deserve better than this from the adults in their lives. That’s what my column is going to be about today.”

‘This is madness’: Texas college baseball player tackled by pitcher, as he was running bases after hitting home run.’

Before she can get back to her desk, Scoop is cuing up another video. “Wait Ms. Talmadge. There’s more. Here’s a headline from a college game where something else really ugly happend.”

Zulah puts down her glassed. “What now?”

Physical Attack By A Pitcher

Scoop reads from his computer screen. “In Weatherford, Texas a college baseball pitcher charged and tackled a player from North Central Texas after the guy hit a home run off of him.”

Zulah is in shock. “You’ve got to be kidding.”

“This is horrifying,” says Zulah. “Was the pitcher held accountable for his actions?”

Scoop keeps reading. “Yes. After the game, his team released a statement condemning the pitcher’s actions, saying he may get expelled from school as a result. Additionally, the Weatherford College police are investigating the incident.”

Zulah starts typing. “I want to know what our readers here in Shady Pines Story Town think about this behavior.  Here’s my question. What should be done to try to discourage this sort of behariour at sporting events?”

**PLEASE LEAVE YOUR THOUGHTS BELOW**