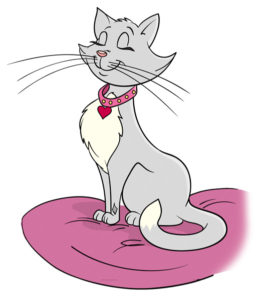 Halley’s Comet, a silver streak of a cat,  grew up in a fancy house up North. The little girl of the family loved playing with the sweet kitty with the blue/green eyes. Halley was a quiet kitten who rarely meowed. Some people even called her skittish, ‘cause even the smallest thing would scare her. In fact, she would run and act scared most of the time.

But when she’d behave, like letting the young girl groom her, she’d get a treat. The little girl called the tasty morsels, tuna. The silver cat loved the way that fishy stuff tasted. It soon became her favorite food. 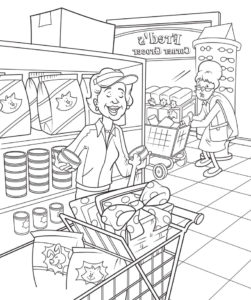 Later, when Halley was adopted by Harold and Edna Sanders, she wasn’t sure how to act. Everything in Shady Pines was so new to her from the town itself, to the Sanders’ home. Halley went back to her old self and became very shy. But then, her new mother Edna, took her to the store and let her pick out what kind of cat food she wanted.

When Halley peeked out from her basket and saw cans labeled “tuna” she made it clear exactly what was best for her. From that moment on, Halley’s Comet was better able to express herself. She started to have more confidence.

Being able to let others know what you need is very important. It doesn’t matter whether you’re at home, in school, away at camp, or over at a friend’s house. Always be polite and ask for what you want. Don’t be rude or mean.

Of course, Halley has a more direct approach when it comes to that dog she has to live with now. Everyone knows Boomerang gets on her last nerve sometimes. But that’s how Halley became more adventurous. She even learned how to stand up to him!

You can read more about the adventures of Boomer and Halley in their National Award-winning books. 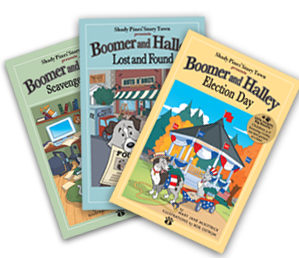 Go HERE to get a book for yourself and join in the fun.

And, remember whether you’re a young girl or boy, be like Halley’s Comet.