A Rabbit Not a Chicken? 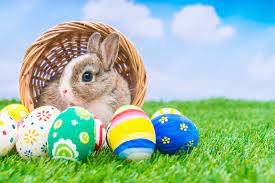 Why an Easter bunny? Have you ever wondered how the legend of an egg-laying rabbit came to be associated with the Christian holiday of Easter? Some people question why Easter’s figure is a rabbit and not a chicken. After all, a chicken actually does lay eggs (even if they typically don’t come out dyed and decorated.)

Turns out the exact beginings of the Easter Bunny myth is not easy to pin down. 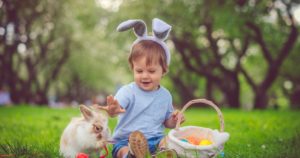 But, there is actually a solid historical reason why the mythical creature is a rabbit.

Rabbits have long been associated with springtime celebrations. After all, it’s the season when baby bunnies are born. As far back as the fourth century, the symbol of the season of renewal was the goddess of dawn and new birth often called, Eostre. 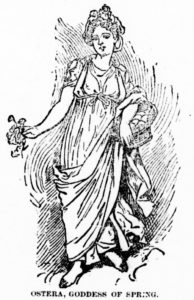 She was typically represented in art by a woman in a flowing gown. The goddess’ name came from the ancient word for spring: “Eastre.” Eostre’s sacred animal was a rabbit. The symbol of the rebirth of life in the springtime was the egg. That’s the connection.

Even though rabbits and eggs have long been associated with Easter, the egg-laying, chocolate-delivering Easter bunny as we know it doesn’t appear in history until sometime in the 1600s.

That’s when a rabbit whose name, Osterhas, translates to ‘Easter rabbit’ was said to lay colorful eggs for children to find on Easter Sunday. When the first Europeans arrived in America a hundred years later, the tradition came with them.

That tradition also included having children make their own nests or baskets in the week leading up to Easter, and then the Osterhase would leave eggs for them.

And that’s how the practice of designing and filling Easter baskets was born.

So here’s what you need to remember. Whether you receive an Easter basket on this special spring holiday, or play the role of the Easter bunny this year, keep this in mind. You can thank that old rabbit ‘Osterhase’ and the long history of the Easter bunny for giving us the excuse to eat a few extra chocolates this season!